JYDGE is a hot new Space Marshals-themed game that we are loving. In this tutorial, we’ll show you how to play it on your desktop computer.

We don’t talk about paid games all that often on this site, but we think that JYDGE is one that is worthwhile. Frankly, it is just nice to come across a game that is simple, but is also very deep. There are tons of different approaches, so you could replay it many different times without getting bored. 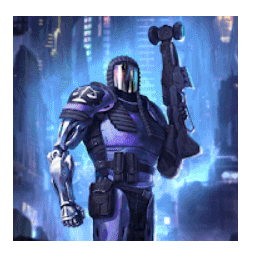 In JYDGE, you get to build your own JYDGE, enter Edenbyrg, and then try to get out alive, as you try your hand at crime fighting. Modify your JYDGE, modify your weapon, and select the companions you fight at your side.

The game is currently rated a 4.8 out of 5 stars, which is a phenomenal rating in the Google Play Store. The game does cost $9.99, which is steep compared to the fact that the majority of games in the Play Store are free, or cost a few dollars or less. Users who have purchased the game have reported that they thought it was worth the money, especially since the game play and over all experience was enhanced so much by the lack of ads and in-app purchases. This game is rated for Teens and up.

This game also has controller support, just FYI for those of you with fat fingers.

How to Play JYDGE on PC (Windows and Mac)

Until JYDGE is released for desktop computers (at the time of publication, there is not yet a version for it), the primary way to play JYDGE with a big monitor and a mouse is with the assistance of an android emulator.

Most emulators are free to download and install, and fairly easy to use. We have been recommending emulators on this site for several years now, and our recommendation has changed over time as new emulators emerged and others faded out or were updated.

At this time, we think that the recently updated Bluestacks 4 is the best emulator for beginners who are looking to get started with emulation on desktop computers.

To get started, here are the simple steps:

Have you tried JYDGE yet? What do you think of the game? Let us know your thoughts in the comments section below.