Home » Knowledge Base » WLAN vs WIFI: What’s the difference?

WLAN vs Wifi. Wifi vs WLAN. What’s the difference? It can be confusing, especially when the terms are thrown around so frequently without explanation. In this article, we’ll break down the differences between WLAN and WIFI simple enough so that even a non-techie can understand it. 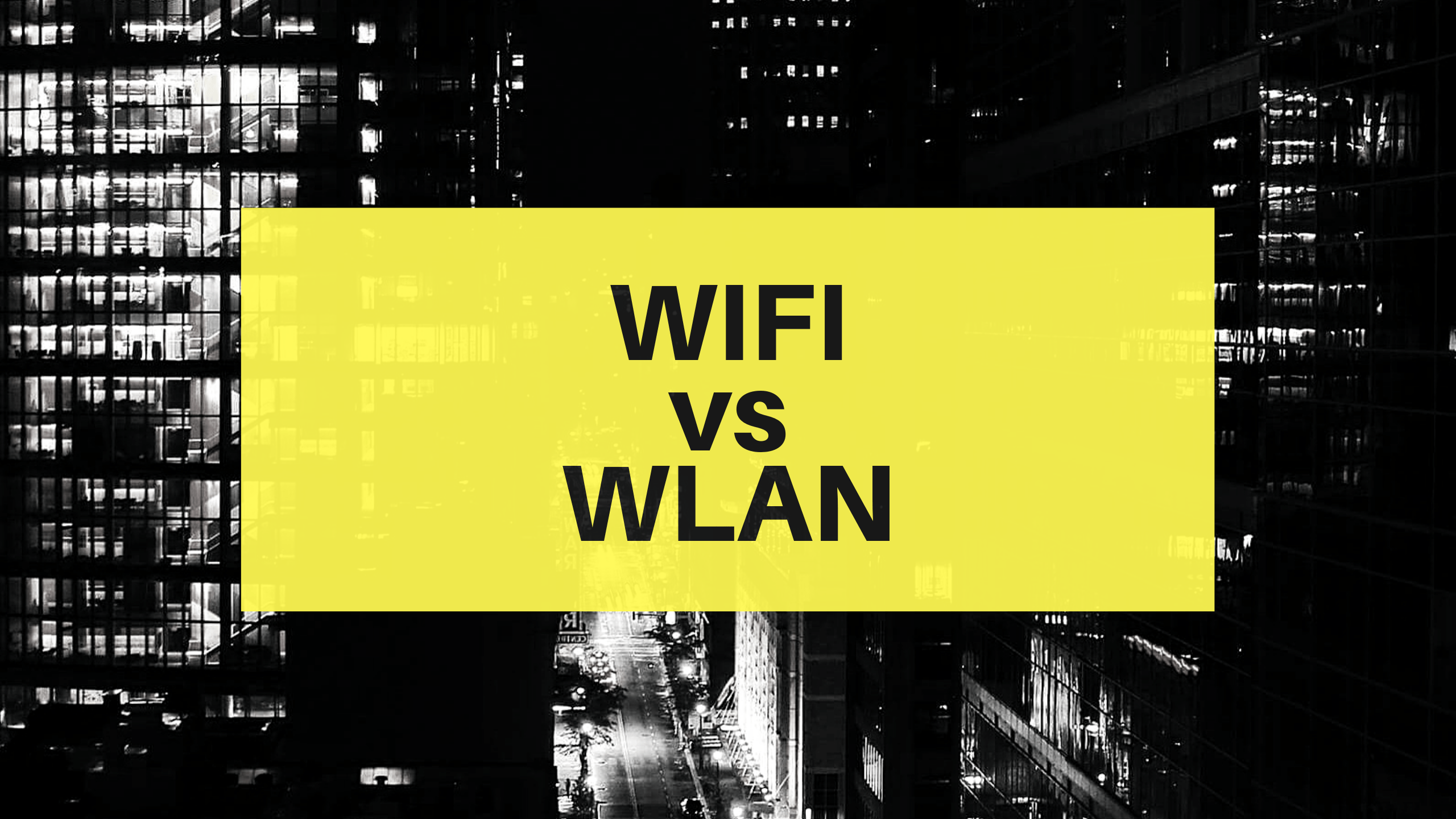 What EXACTLY is WLAN?

First of all, the word WLAN is actually an acronym which stands for Wireless Local Area Network. A WLAN sends out the high frequency radio waves that users (like you and me) use to access the internet, games, apps, etc while using our smartphones, laptops, and desktop computers. Most WLANs include an access point to the internet. This means that you can take your device and walk around, instead of having to sit in one place, plugged in to the internet with a cord.

What EXACTLY is WIFI?

WLAN sounds a lot like what we understand WIFI to be, right?

The term “wifi” is actually a trademarked term that was registered by the WLANA, the Wireless Local Area Network Alliance.

Technically, WLAN means any kind of wireless network, no matter what it looks like and what sort of infrastructure or technology is implemented.

Wifi, on the other hand, is a type of WLAN that follows the IEEE 802.11 standard.

What is the difference between wifi and wlan?

Still not getting it? Wifi is a WLAN, or a type of WLAN. Here’s a simple diagram that illustrates this: 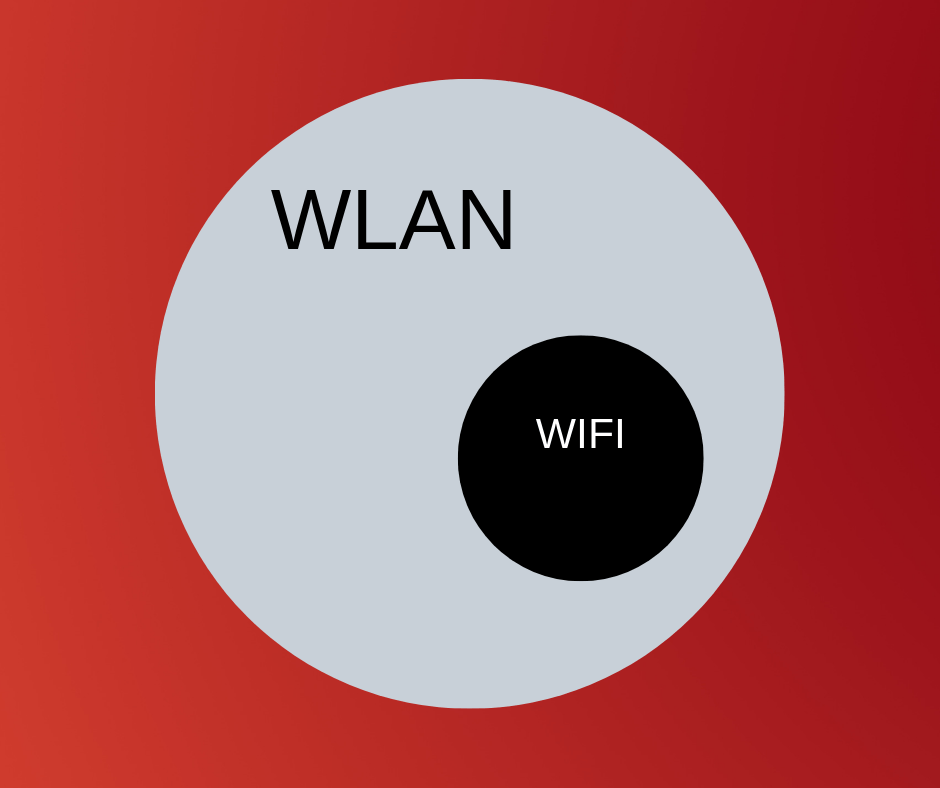 The IEEE is the Institute of Electrical and Electronics Engineers, founded originally in 1884 and then formed again by merger in 1963. The IEEE (people call them the I-triple-E) develops the industry standards for computers and electronics. The I-Triple-E 802 standards are the ones associated with local area networks and are widely followed throughout the industry.

The 802.11 standards themselves can be reviewed here if you are interested. But mostly, they are specifications for the over-the-air interface between a wireless user and a base station, or between two wireless users. If you need more technology than that, I recommend that you go to the specifications yourself and read them.

SO there are other WLANs that do not follow the same time of rules/standards as what we know as “wifi”?

Yes, exactly. But to be able to be called “wifi” the service needs to comply with 802.11. This is the primary purpose of the WLANA (as noted above). They are dedicated to certifying that products using the term “wifi” meet the 802.11 standards.

Is WLAN and WIFI the same thing?

Again, as we discussed above, not exactly. Wifi is a type of WLAN, but not every WLAN is WIFI. If a particular WLAN does not meet the 802.11 standards, than it cannot be called WIFI.

Is WLAN faster than WIFI?

Again, this depends on what we are talking about. As we know and have covered several times, wifi is a type of WLAN. As far as speed of the WLAN vs WIFI, this is going to depend upon the setup. If what we are talking about is a wired WLAN vs a straight WIFI setup, then yes, it is likely that the wired ethernet cable connected WLAN is going to be faster than the WIFI connection.

What is the difference between “wireless” and “wifi” then?

Bluetooth is a lot like wifi in some ways, in that it helps a device get connected using signals. But it differs in both purpose and in functionality. The Bluetooth in your phone is only set up to connect your phone to a device that is nearby, by sending and receiving signals, generally within 20-30 feet. It will not connect you to the internet. Wifi, on the other hand, allows your phone to connect to the internet, and the signal can be broadcast across a much wider range.

In general, you can think of the Bluetooth connection as being more secure than a wifi connection, simple because it is hard for people or other devices outside of the range of the Bluetooth capability to get in between the two devices communicating.

Why do Chinese devices use WLAN instead of WIFI?

In years past, the Chinese government banned WIFI. This meant that Chinese users could not use wifi, even though wifi was built into the device. The government required that WAPI be used instead. WAPI is another standard/protocol, and stands for WLAN Authentication and Privacy Infrastructure. This restriction was abandoned, but almost every device sold in China still have the capability of supporting the WAPI standard. The term WLAN is used on products to let users know that the device supports both WIFI and WAPI.

What is the difference between WLAN and WWAN?

WWAN is Wireless Wide Area Network, as opposed to the Wireless Local Area Network. WWAN generally refers to mobile networks, which you may have heard called 3G, 4G, or 5G networks by your cellular phone service provider.

If you still have questions about the differences between WLAN and WIFI, leave them for us in the comments. We’d be happy to answer them or create a new post to address your comment.