Home » Entertainment » Is It Illegal To Use a Vpn for Netflix?

It is illegal to use a VPN for Netflix? If you search for this answer on the internet, you will likely find articles that state “NO” it is not illegal (meaning legal). I disagree. In this article, I’ll explain why.

Just Because Using the VPN is Legal…

Just because the use of a VPN in a particular country is legal does not mean that you can’t commit a crime while using it. Of course you can commit a crime while using a VPN, and while the VPN might shield your identity, it doesn’t prevent the act from being any more or less a crime. When people answer this question (regarding VPNs and Netflix), they often focus on whether a particular country allows the use of VPNs to access blocked or banned websites or content.

But no one focuses on the actual act of watching Netflix on it.

Before we go on, please be aware that there is nothing in this article that is intended as legal advice. If you need the actual advice of an attorney on a legal question that this article addresses, we recommend that you contact a duly licensed and informed lawyer to get your questions answered. The content in this article is the opinion of the author, presented for entertainment purposes only. 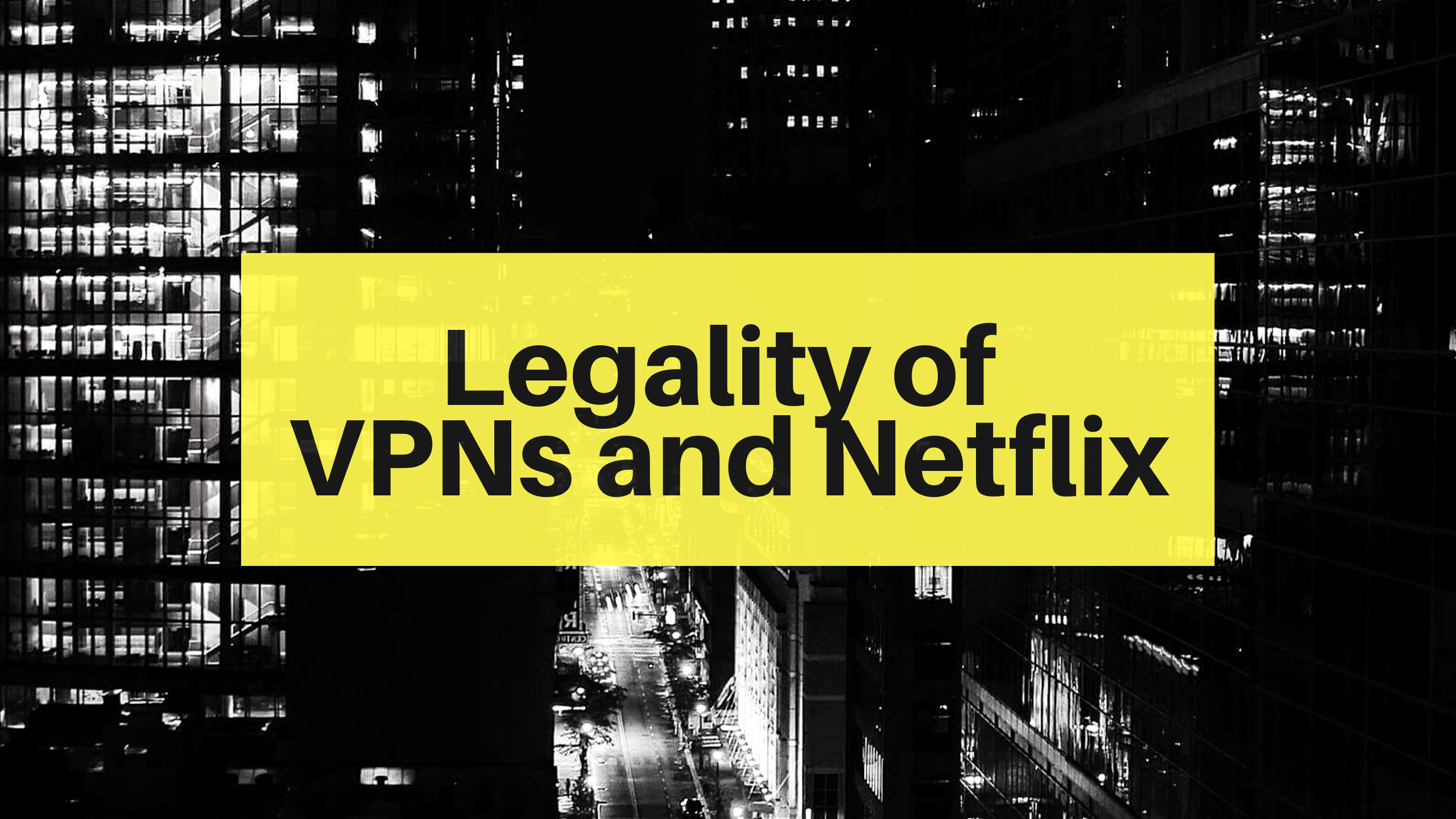 Let’s go through this hypothetical scenario.

Is there any crimes being committed here?

NO. While you might be violating your agreements with Netflix, you are just getting access to exactly what it is that you paid for, what you have the RIGHT as the result of the transaction and agreement with Netflix to get access to.

But let’s look at the next scenario.

Here’s another hypothetical situation, with a slight twist.

In this case, you may have done one of a few things:

Most people that I see who look at this argue that no illegality has occurred. After all, in this hypothetical, the user is a paying subscriber of Netflix. He isn’t stealing anything, is he? By simple getting access to a different library? After all, he is paying Netflix, right?

I would say that if this user is getting access to the exact same library as he would have if he had been honest about his country of origin, I would agree. Maybe this user would be in violation of the terms of service, which could also support civil claims associated with misrepresentation or breach of contract.

But what if it costs more to get access to the library?

But let’s examine this further by looking at the actual elements of a potential crime that Hypothetical #2 could apply to.

There are hundreds of different versions of larceny, theft, robbery, etc, etc throughout the world. But let’s examine one statute in particular, which I have taken from the State of Washington (United States) statutes.

The crime of “Electronic Data Theft” is committed when:

Now, was this statute created with Netflix in mind? Probably not. In fact, many statutes that discuss theft include the requirement that you must intend to deprive the owner of the property of it permanently, which would mean that borrowing property but returning it would not result in theft charges under those statutes. But when you use Netflix, you are getting access to electronic data (the data that makes up the movie/show) with the intent to control it (meaning watch it).

Spirit of the Law Should and Will Eventually Prevail

In general, when one person does anything to the property of another, regardless of whether he takes, borrows, touches, examines, watches, alters it, if he does that inconsistent with the ownership of the owner, he is at risk of being charged with a crime. Many countries (including the United States) take the property of the individual or business very personally, and work very hard to protect it.

While many current statutes do not contemplate using a VPN to watch Netflix, most states and countries have enacted these “catch all” type laws that can be used in place of more specific laws that do not apply.

For example, you might be charged with “disorderly conduct” if you do something that does anything to impact the public at large. There’s no definition of what the conduct needs to be, or what sort of impact is required.

Criminal mischief if another one of these, and you can be charged with it in certain places if you do anything that could constitute meddling, even if you don’t steal or harm anything (such as borrowing, for example). Under these crimes, the bad conduct is what the police officers say it is, and the statutes are very vague about it.

I see in the future that there could be pressure by companies like Netflix, Huli, Amazon Prime and others to make it a crime to ‘steal Netflix’ using a VPN, though when it happens by people out of the country, I am not sure how it could be enforced. And perhaps this is why it hasn’t occurred yet-Netflix would rather spend money just making it harder for people to steal access to its services than pushing through laws that can’t be enforced.

People would argue that using a VPN to access Netflix is just “borrowing” the movie, because there was no intent to keep it from Netflix permanently. In response, I would argue that maybe the “theft” wasn’t so much as watching the actual movie as it is to use the Netflix platform to do it, because isn’t that what is being stolen? The service delivered by the platform?

Just Because There Isn’t a Statute On Point….

Doesn’t mean that you shouldn’t pause before stealing Netflix with a VPN. Even if there isn’t a law, just think about what you are doing when you use a VPN to access a Netflix library you haven’t paid to access. Netflix doesn’t own the material (well, actually it does own some of it, but not all of it). Some people argue that since Netflix doesn’t have the exclusive right to provide access to a particular video, that it isn’t wrong to use a VPN to avoid blocking protocols to watch it.

This is beside the point. Netflix is a service. It gives you the ability to watch its library. But for Netflix giving you that ability in exchange for your money, you’d have to find somewhere else to watch that video or television show. We are viewers don’t own Netflix. We don’t own the platform, and use of the platform is only granted when you pay for it.

You can’t get access to Netflix (lawfully) without paying for it.

When you use a VPN to get access to Netflix, you are utilizing a service that you have no right to use. There’s no reason for you think that you have that right, and by using the VPN to hide your country of origin, you are acknowledging that you understand that the right does not exist and you are affirmatively circumventing it. You are taking advantage of a service against the rights and permissions of Netflix.

In short, you are TAKING SOMETHING YOU DON’T HAVE THE RIGHT TO TAKE. By trying to justify it through the various ways that people can watch videos, or the lack of a statute that specifically addresses it, or pointing out that no one goes to jail for using a VPN, completely misses the point.

When you take something you don’t have the right to take, something that doesn’t belong to you, you have committed a crime. And for this reason, I take the position that it IS illegal to use a VPN to get access to a Netflix library that you wouldn’t otherwise have the legal right to access.

Does it matter that I think that people are committing crimes using VPNs to watch Netflix? Not really. I doubt anyone is watching Netflix with a VPN to go off and do other bad deeds in the world. They just want to watch this show that they can’t get access to otherwise.

Since the age of being able to download and consume copyrighted content (think back to Napster), people have delighted in the ability to thwart the rights of the owners of music, videos, television, and movies. Many people believe that artists and filmmakers and musicians make too much money, or that their content is too expensive. But you can bet that they’d freak out if someone came to their website and copied everything for their own, or came into their house and walked out with their laptop. They’ve just managed to find a way to think about Netflix (and downloading copyrighted material) as something that isn’t thhhhhhaaaaaaat bad.

I wouldn’t assume that watching Netflix via VPN (or circumventing Netflix or others platforms) will always be something that Netflix and the law enforcement authorities will ignore forever though.

What do you think about the question of the legality of watching Netflix using a VPN? Let us know what you think in the comments.