Looking to download West Game for PC (Windows/Mac)? In this quick tutorial article, we’ll show you how you can get started playing West Game (and other popular games available only for android devices) on your desktop or laptop computer with the assistance of a free android emulator. 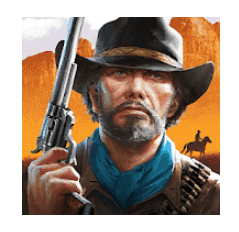 Welcome to the wild, wild west. West Game has declared itself the first and only western themed simulation game (SLG). Whether or not it is the only one (if it is, it won’t be up for long) isn’t as relevant as what you get to DO in the game.

The game is set just at the end of the American Civil War (in the 1860s). People are flooding west, fleeing the war torn lands to areas of the United States which have not been settled, stripped of resources, or impacted so heavily by the violence of war.

In order to survive, many settlers went further than they ever imagined; they snuck, stole, fought, and even killed for the opportunity to build riches and a new life in the west.

In this SLG, you’ll:

West Game is overwhelmingly rated 5 out of 5 stars with google play. The content is rated for Teens and above due to violence and blood. It has over a million installs, and the developers are active in response to user reviews. The game is free to install, but there are in-app purchases in the range of $0.99-$99.99.

There are lots of good reasons to want to play West Game on your desktop computer. Until West Game is available in browser or formatted for PC, the primary way to play this game off of your android device is with the assistance of an android emulator.

An android emulator is a piece of software that is usually downloaded through the internet. While there are many options, we recommend Bluestacks, because it is free to use, it is reputable and won’t install malware on your computer, and it is easy to set up and use, even for people who struggle with technology.

Here’s how you get started with an emulator (the steps):

Emulators like Bluestacks can be used to play any number of android games and to utilize android productivity apps that wouldn’t otherwise be available for your desktop computer.

Have you tried playing West Game? Would you recommend it to others? Let us know in the comments section below.