Total Party Kill was released in July of 2019, and has been a surprising hit! It has been installed thousands of times, on its way to millions of installs. In this tutorial, we’ll show you how you can enjoy this hot new game on your desktop computer.

Brought to us by Finn game developers Adventure Islands (the same group who released Heart Star), we now have Total Party Kill. This game is reminiscent of a style and look (pixels and all) from when I was young and video games were novel. 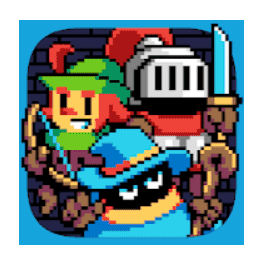 In Total Party Kill, you have to figure out which of the characters will be sacrificed to flip switches that are out of reach. You might be able to save some, by using the other characters to get you to your goals. The tagline for this game is “sacrifices must be made” and it is so right.

This game is currently rated 4.4 out of 5 stars in google play store. Complaints include annoyances with the ads, while others think the game is great but just needs a slightly stronger story. I’d say for the price (FREE) it is pretty hard to complain about a game that is this fun.

How to Play Total Party Kill for PC

Mobile gaming is great but sometimes it is just nice to be able to sit with your laptop or use your desktop computer and larger monitor. Until Total Party Kill is released for desktop, you’ll have to play Total Party Kill with an android emulator.

An android emulator is a piece of software you can download and install for free off the internet, which allows your desktop to imitate an android device enough to play the games you like and use the apps you need.

There are several options for emulators for android but we like and recommended Bluestacks 4.

To get started playing Total Party Kill for PC, here are the simple steps:

That’s all you need to do with an emulator to get started playing Total Party Kill for Window and Mac.