Snake Gear is a fantastic casual experience. Players ride a snake that gets bigger as it eats more coins. Download Snake Gear for PC/Mac with Nox App Player.

Snake Gear for Windows is a simple yet entertaining and addictive casual experience. The players have to collect coins and break the barriers in order to ride forward. As you collect more coins, your snake will get bigger and will be able to break strong barriers. 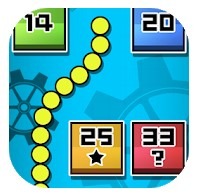 You have to make your snake strong by eating more coins if you are going to break some barriers. The controls are very simple. You just have to slide across the screen in order to move the snake. The game-play is entertaining and addictive. Environments have been designed excellently.

In case you own Android tablet or smartphone, it is to mention that Snake Gear is available in the PlayStore.

Snake Gear is a fantastic arcade game with fun-filled levels and an addictive game-play.

Have you tried Snake Gear? What did you think of the game? Let us know what you think about Snake Gear in the comments.

In doing a routine update of this article, we discovered upon checking that Snake Gear is no longer available for download in the Google Play Store.