Looking to play Gladihoppers for PC? You’ve come to the right place. In this quick tutorial, we’ll review Gladihoppers – Gladiator Battle Simulator! and then show you how you can start playing this fun game on your desktop computer.

What is Gladihoppers? This is a 2D gladiator battle game, with the retro pixel art look with 3D low poly environments. 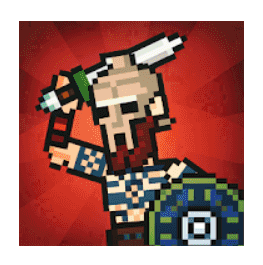 This is a fast paced, fun, and original game. You have several different types of battle stances, and close to 100 items to acquire to customize your gladiator (think swords, axes, shields, clothing, helmets, and more).

Play Gladihoppers in career mode, arcade mode, or quick fight mode, depending upon how much time you have to play.

This game is doing well so far in Play Store. It is rated 4.1 out of 5 stars, with 500,000+ installs thus far. The content is rated 17+ due to violence and blood (this is expected, after all, it is a gladiator battle game).

Common complaints leading to one-star review include complaints about the quality of the controls, the ads make the game less enjoyable, and that the game is too simple. We have seen that the developers are active in the comments and releasing updates to the game to try and address bugs and problems, which we really like to see.

There are a lot of options available for download from the internet. We like Bluestacks 4 as a good emulator for beginners to start with. We do recommend that you take a look at the system requirements before you get started because it does not always work well with older computers.

To get started with an emulator to play Gladihoppers, the steps are not difficult:

That’s it! Have you tried Gladihoppers? Let us know what you think about this creative throw-back 2D fighting game.